First things first, I hope you had a cheerful Christmas and a sturdy New Year 🙂 I believe the soubriquet bestowed on this current cohort of 365 days is … twenty-twenty-three.

Titling a poem, and even more-so a collection of poems, can be a monumental thing. I was always drawn to collections by their titles — Maud and In Memoriam (Tennyson), Memories of War and Children in Exile (James Fenton), and Ground Work (Paul Auster) were just three collections that I bought as a teenager having been intrigued by their titles.

I found it tricky to find a title for my pamphlet that was relevant to a substantial number of the poems. I pondered whether the title of one of the individual poems might work, or whether there was an overarching theme that might suffice. Eventually I noticed that several of the poems touched on the theme of clothing and, since one of the individual poems was called Dressing Up, it sprang to the fore as prime candidate for the title of the pamphlet.

Once the pamphlet had been published, I created an email summarising the pamphlet as a marketing tool and, since I knew from personal experience that visual media isn’t very accessible to people with vision disabilities, I also created an audio version that you can listen to on YouTube. Just to mention though that the Cinnamon Press website has been restructured since I recorded that flyer, so the web link to my pamphlet does not work anymore. This is the new link to Dressing Up on the Cinnamon Press website 🙂

what you have on your feet
the difference between
underground weekend engineering work
and a system that does,
(works)
not tied up
in a diversion of mazes and replacements

This is another poem that, six years since publication, I wonder whether it might have been better if I’d used more punctuation than just a final full stop. I don’t recall making a decision to Eschew commas, semi-colons and end-of-stanza full stops, but evidently I did!

The origins of this poem are from a trip I made to London. I was living in Bristol with a friend with whom I had co-founded a magazine of Indie music. The magazine was called Splinter, and we wanted to try and speak to somebody at the headquarters of Borders bookshops with the hope they might stock our magazine. The local Bristol branch of Borders had happily taken ten copies to sell, but we had big ambitions and wanted to be in every Borders store in the UK!

This trip happened back in 2005 — far too long ago to remember the nitty-gritty as I write this blog post in 2023. The one thing I do remember well, and which features in the opening of the poem, is that it matters what you have on your feet! My friend Fliss, editor of Splinter, and I were emerging from a London Underground station. Fliss was wearing flip-flops … and it was raining!

I liked the idea that, at least for women, a day can be different choices of footwear that features at different times of the day. In this poem we’ve got the inappropriate flip-flops in the daytime, followed by an elegant pair of heels in the evening. Before Dressing Up (the pamphlet) had been one of the Cinnamon Press pamphlet winners, a day-job colleague had kindly adapted a ShutterStock image that I’d paid for into a cover that, I felt, would have been perfect for the cover of Dressing Up. I later learned that there wasn’t the possibility of using cover art, so the cover never got used … but I’m delighted to post it here to brighten your day 🙂 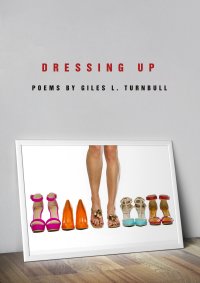 Normally I’d use an ALT tag to describe the image for blind and visually impaired people, but since women and men alike may be interested in descriptions of the footwear in the image, I shall include the text that another knowledgeable friend of mine wrote for me when I had hoped I could use the image on the cover 🙂

A woman standing is shown from her feet up to her knees. The woman is wearing a pair of red flip-flops that have round brown glass beads and light orange shell discs dangling; the woman has maroon red painted toenails. Alongside her flip flops are two pairs of high heel shoes to her left and another two pairs to her right. From left to right these are: cerise pink platform sandals with ankle strap; bright orange pointed toe stilettos; turquoise pointed toe stilettos with cream t-bar strapping; and patent red round toe high heal sandals with ankle strap. Above the photo image, at the top of the cover can be seen two lines of text comprising the pamphlet title, “Dressing Up” followed by the line “Poems by Giles L. Turnbull”. The title “Dressing Up” appears in the same colour red font as the patent red round toe sandals. The text “Poems by Giles L. Turnbull” appears in smaller black font.

There isn’t a heck of a lot to say about this poem really! It’s just a tongue-in-cheek parody of those slightly-racy Readers’ Wives columns in less-highbrow reading material of the 1980s. I just reflect that modern communications of the electronical kind, can be far more revealing than those saucy column inches of yore!