I was invited to Presteigne, a small town in Powys, about 20 mins drive north east of Hay on Wye, to read at a Poetry in Presteigne event with Pam Scobie and John Barnie on Monday 8 May 2017. 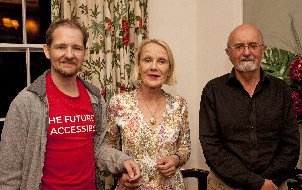 Other than figuring out where would be best to break my set for the interval I essentially had the same running order as for Cardiff, though with 10 minutes more for my Presteigne set I added one additional poem to read with the screen reader, and I talked a little bit more about the mechanics of using a screen reader to perform poetry. 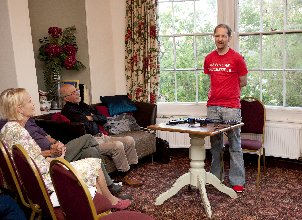 Hazel's time in the Spotlight

Before I set off for Presteigne I had an idea that it might be nice to write a bit of text for Hazel to read to the audience, introducing herself formally, as it were. My instinct was that I wouldn't use this, but it was there if I needed to fill a little bit of time. So many people came up to talk to me in the interval about Hazel that I knew having Hazel perform her introduction was the right thing to do.

This is what Hazel said, and you can listen to the lady herself reading it:

Hello everybody, thank you so much for listening to the poems I've read for you tonight. My name is Hazel and I'm a voice made by Microsoft and I'm being used with a piece of software called N, V, D, A, which is an acronym for Non visual desktop access, and it's a Screen Reader program that reads aloud any text appearing on-screen for anybody who has difficulty reading printed text for any reason.

I know it's not quite the same as listening to a human speaker, but I've done my best to pronounce my words poetically for you.

It's like in Pygmalion and the film My Fair Lady where Eliza Doolittle needs to be taught to speak proper. I wish you could see me though because I'm even prettier than Audrey Hepburn!

With that I'll hand you back to Mister Giles to finish with one more poem from Dressing Up. It's been lovely to meet you all, :)

For those interested, I added a pronunciation entry into Hazel's voice dictionary, so that when she says 'poems I've read' the word read is pronounced 'red', and the A in 'N, V, D, A,' is pronounced 'Ay' rather than the hard A like in the word apple, and the commas between each letter in NVDA make Hazel pause a little between each letter so that the audience realise that it's an acronym rather than a word that the screen reader program isn't managing to say very well. I'll talk more about the mechanics of making a poem readable using a screen reader in next week's post :)

Bringing the House Down

As Hazel uttered the words, “I'm even prettier than Audrey Hepburn,” there was so much laughter that I had to track Hazel back up to the end of that line so the audience could hear the final line! I was delighted when Hazel deservedly received her own round of applause at the end of that piece :)

That's the last of the currently scheduled events on my events page, but it's not going to be the last outing for Dressing Up this year — Hazel has itchy feet and wants to see a lot more of the poetry world! I'm looking into doing 2 or three local events, and there is already talk of me reading in Leicester and London later in the year. So watch this space because Hazel is eager to say hello to you :)