This is a follow-up to my previous post, Access all Poetry in which I talked about poetry in terms of its accessibility for disabled poets and audiences. I spent Thursday night reading poetry at Spike Island with deaf poet Donna Williams and paralysed poet Stephen Lightbown.

In order of appearance: 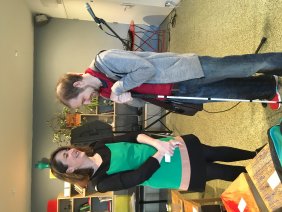 Everything spoken that night — introductions, poems and the Q&A was signed by Nikki Harris. obviously I can’t see the signing but I am told it was awesome seeing it as the speakers spoke the words. I could actually hear Nikki very quietly speaking the words I was reading so that lip readers could follow that too ... and I paced my poems to reflect that, moving from one line to the next a little slower if I thought Nikki hadn't quite finished signing that line. In musical parlance, it turned the performance of a poem into a duet :) 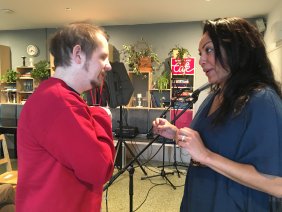 I was the first poet to take the stage. I read six poems, some taken from my pamphlet, others from my first full collection (currently in preparation). 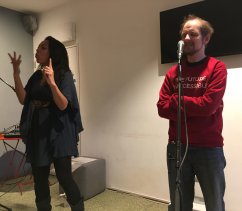 Donna read next. She is a poet with a keen interest in translation and in how her poetry can be made accessible to hearing and deaf audiences alike.

My name is Donna Williams and I am a Deaf British Sign Language poet, writer and consultant based near Bristol. DeafFirefly is a name partly inspired by a friend who answers to DeafTigerBee, and Firefly is one of my all-time favourite shows. All hail Joss Whedon. And hence, DeafFirefly was born.
I grew up in the ‘hearing’ world, attending mainstream schools, and came to the Deaf world late, when I studied at the University of Central Lancashire. Joining the Deaf student community, I quickly started learning BSL, and I had some of the best years of my life. By the time I graduated in 2006, I could sign fluently and considered myself bi-cultural, moving in both hearing and Deaf worlds. This is an outlook I still have, as I spend time in both worlds, but sometimes this is not easy, I reflect on this in some of my poems.
(from Donna’s website, deaffirefly.com) 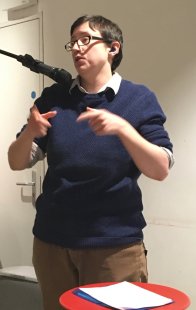 Donna’s poems began with one inspired by an Emily Dickinson poem but included some wickedly humorous poems too ... including one that talked about envy of the able-bodied, people with hearing and men (because they can just whip it out and pee where they like!)

Headlining the evening and bringing the poetry sets to a close was Stephen Lightbown. Stephen was launching his first full collection, Only Air published by Burning Eye books. 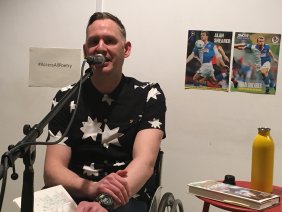 Stephen’s range of poetry was as varied as Donna’s. There were reflective ones about his life since the sledging accident that left him paralysed — the cover photo of his collection is of the tree in question. There were also humorous ones such as one about footballer Alan Shearer who, when he played for Blackburn Rovers, visited the hospital where Stephen was recovering. Alan was present at Spike Island courtesy of a huge poster of him in his Blackburn Rovers kit which fell off the wall during the reading of the poem ... I reckon he thought he was in the penalty area and took a dive ;)

Only Air is a deeply personal collection of poems which explore what it is like to go through a life changing accident and then to re-exist in a world that is suddenly unfamiliar. It is a story of making sense of a new way of surviving and beliefs once held whilst trying to overcome barriers, prejudices and labels. Sometimes moving other times a wry humorous account of memories, this is part biographical with a healthy mix of reflection. This collection considers what it means to be part of a family, being alive when you don’t conform, and making your journey when the way you perceive yourself is often very different to the ways others observe you. At its very core, this is a discovery of what it means to be normal and to regrow.
(from the publisher, Burning Eye product page)

We ended with a Q&A session with Fiona hosting as well as asking questions before inviting questions from the floor. The photos below show the Q&A with me, Donna and Stephen first, followed by Fiona, Stephen’s wife, Carly, Donna and myself. 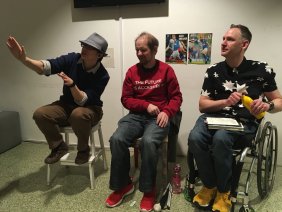 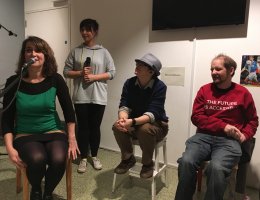 I’m thrilled to have been invited by Stephen to support him at his book launch. I didn’t know Stephen until I received an email asking me if I’d be interested in supporting him. I said yes without having to think about it! It’s the first disability-focussed poetry reading I’ve participated in though, after talking to Stephen by email, he told me he’d heard me reading on Lunar Poetry Podcast 105 which discussed access to publishing; and here is a link to a transcript of that recording. and, related to that, the podcast was following the publication of stairs and Whispers: D/deaf and Disabled Poets Write Back by Nine Arches Press, in which Donna and I both featured :)

As a venue the Spike Island café was awesome. The acoustics were great and all tickets were sold producing a 50-strong audience. Every poem was received with focussed attention, laughter in the humorous parts and deference in the reflective ones. Finally, last but no means least, a huge thanks to my friend Kate who collected me from Bristol Temple Meads station, drove me to Spike Island and took all the photos in this blog post :) xx