Unbelievably excited about being accepted on to the first Zoeglossia retreat for writers with disabilities in May. Its in Texas which in itself is bonkers. Itinerary is now coming together well. Three days in Austin, then two days in San Antonio before four days on the retreat at Our Lady of the Lake University and then a quick sprint upto New York for two days there before flying home! Already sourced my open mic poetry night at the Bowery Poetry Studios in NYC to try and speak at. Hit me up with recommendations for Austin and San Antonio! And again huge thanks to the Arts Council as the Texas leg of this trip wouldn’t have been possible without support from the Developing Your Creative Practice grant.
(Stephen Lightbown)

That sounds an absolutely fantastic opportunity and, I’m assuming, since it is a retreat for writers with disabilities it will be adequately staffed with people that can offer any kind of support an attendee requires. Stephen, I know because I’m supporting him at his book launch in April (see my events page for info) has been paralysed since a sledging accident when he was sixteen years old. There is a potentially huge range of disabilities that attendees might have and it made me ponder how well equipped events, retreats and residencies are so that a disabled person has as good an experience as an able-bodied attendee. Let’s have a look at a few reports from the field.

“Don’t worry. It will get better.”

VIDA is a non-profit feminist organization committed to creating transparency around the lack of gender parity in the literary landscape and to amplifying historically-marginalized voices, including people of color; writers with disabilities; and queer, trans and gender nonconforming individuals.
(from About VIDA(

The experiences of disabled writers highlighted by VIDA at this event send shudders down my spine. Bearing in mind that I lost my sight while I was living in America and found it a very accessible place to live — with all the buildings being far more recently built than ones in the UK they were, by design or by happenstance, designed much more with accessibility in mind. It is a sobering reminder though that making the building accessible is not where making an event accessible stops

This Report from the Field is a post by a collective of anonymous writers regarding the developing controversy concerning noted literary convention AWP. We are the Disabled and Deaf Uprising, an anonymous collective of writers. We have all kinds of disabilities. We sign. We speech read.
This past weekend we joined over 12,000 writers, editors and publishers in Tampa, Florida for the Association of Writers and Writing Programs (AWP) annual conference. This is the largest conference for creative writing in North America. Amazon, the National Endowment for the Arts and the Poetry Foundation are major sponsors. Writers go to see and be seen; to schmooze and network; to give readings and present on panels.
[...
]
Karrie was supposed to be on two panels, but the airlines would have made it difficult. Could she Skype in?
The email from AWP discouraged it: “[attendees] feel more involved when it’s a person-to-person interaction without the layer of technology between them.”
This stung. Karrie didn’t come to Tampa, and she didn’t Skype in.
Do the conference organizers, who are also writers, not know that some of us depend on layers of technology in daily life? We use technology to breathe, to hear and to speak.
(from a report on how disability was handled at AWP in 2018)

The event I’m reading at with Stephen Lightbown and Donna Williams in Bristol on 11 April 2019 is a breath of fresh air on the poetry event circuit. The building is accessible and, with the event being signed it is accessible to hearing and deaf audiences. There is a quiet area which can be helpful for people with autism spectrum conditions or sensory processing differences. I hope as many poetry aficionados who live in, or within travelling distance of, the Spike Island centre in Bristol will come and support Stephen, Donna and myself, and show that these accessible venues really matter.

Welsh publisher, Seren Books, recently offered five two-week placements for students of the College of Arts and Humanities at Swansea University. I mentioned in Poet on the Page on the 3rd of March that I was pondering paying a CV-writing service to update mine. well, I did and the delivered it three days before the deadline for applying for one of these Seren positions. I gather around 100 applications were received and around 15 were invited to attend interview. I was one of the fortunate interviewees :) 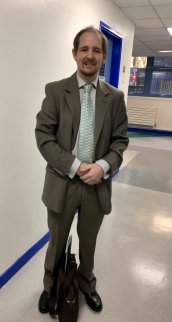 I decided it’d be daft not to go smart to a job interview, even if it was being conducted at the university by two members of the university employment team. Maybe that’d be the edge ... I imagine female students having something other than jeans and t-shirts with them, but male students ... maybe not! I figured that my work history as a transportation planner would cover any questions about ability to prioritise to hit deadlines, communicate with stakeholders and demonstrate being able to take the initiative, so I dressed smart and went to sit in the hot seat. Many thanks to Son I, my sighted guide who leads me to and from the poetry workshops each week, for the fantastic photo.

The verdict came the following afternoon .... drum roll please ... I have been offered one of the five placements! I’m over the moon! The last job I did was on a call centre staffed almost entirely by blind and visually impaired people so this will actually be the first time I’ve worked as a blind person amongst sighted colleagues. I have met or interacted with a few of the Seren team in the last five years, so I’m really looking forward to joining them at the literary coal face :)