I am one of those people who thrive on deadlines, nothing brings on inspiration more readily than desperation.
(Harry Shearer, Actor, comedian, writer, musician)

I find deadlines have a very focussing effect. It's like my brain switches off the child locks and lets me spot the words that aren't working to their true potential. In the final hours before a deadline I move up a gear and get the sharpest steak knife out of the block — you can use a carving knife to hew the rough edges off a poem, but to release the full flavour it needs the surgeon's scalpel to pare right back.

I love deadlines. I like the whooshing sound they make as they fly by.

It's always good practice to read a copy or three of a magazine to get a feel for the types of poetry they typically publish. I'm a firm believer that research pays off, so I'll always glance at an editor's social media timelines to see what sort of things they say and share. YouTube is helpful for tracking down interviews with editors where they talk about what they are looking for in a single poem or a collection.

This YouTube video by Jeff Shotts, executive editor of Graywolf Press, talks about the mathematical reality of rejection, but in it is an important nugget of information:

We want our poetry books to be challenging. Challenging in a way that these are poets who are engaging with important social issues in many cases.”
(Jeff Shott, Executive Editor of Graywolf Press)

Understanding the modus operandi of a publication or competition is no guarantee of success, but I think it stops me sending poems that don't really fit the style. If it's not a themed issue or competition then maybe it's important to consider the language, pace and style of previously successful entries.

Listen to what a judge's poems are like. Competition judges won't want to see a facsimile of their own work, but being aware of how they deliver their poems to an audience can be enlightening ... do they read at a rate of knots or allow lots of space between lines and stanzas etc

Finger on the Button

City life is stressful. Everybody is running around like crazy, stuck in traffic jams trying to make meetings, trying to make ends meet, trying to meet deadlines, trying to get kids to and from activities. There aren't enough hours in the day for all this business.
(Rebecca Pidgeon, British-American actress and singer-songwriter)

I try and discipline myself that, no matter that I've edited a poem four times it can always bear a final read-through and punctuation check before hitting the submit button (or licking the envelope if you're a hard copy submitter). The number of times I've read through a poem on the day of submission and spotted a full stop at the end of a line but no capital letter at the start of the next is surprising. Whilst it'd be churlish for a magazine to decline a poem on the strength of one grammatical slip, in a competition like the Bridport that received over 4,000 poetry entries in 2017, it'd be daft to overlook something that might be the difference between making the shortlist or not.

Because most submissions I do are Word files, sometimes I might have had a mental slip and spelled something the American way rather than the UK way ... I lived in USA for 5 years and often find it tricky to remember which British words use a z and which use an s!

Many people visiting the World (non-US) version of our website ask us why we spell words such as realize, finalize, and organize with ‘-ize’ spellings, rather than ‘-ise’. There’s a widespread belief that these spellings belong only to American English, and that British English should use the ‘-ise’ forms instead, i.e. realise, finalise, and organise.

The use of ‘-ize’ spellings is part of the house style at Oxford University Press. It reflects the style adopted in the first edition of the Oxford English Dictionary (which was published in parts from 1884 to 1928) and in the first editions of Hart’s Rules (1904) and the Authors’ and Printers’ Dictionary (1905). These early works chose the ‘-ize’ spellings as their preferred forms for etymological  reasons: the -ize ending corresponds to the Greek verb endings -izo and –izein.

The situation is slightly complicated by the fact that certain verbs must always be spelled with ‘-ise’ at the end in British English, rather than ‘-ize’: this is generally because they have come into the English language in a different way. [...] The difficulty in remembering which words belong to this group is perhaps one of the reasons that –ise spellings were adopted more widely in British English.
(from Oxford Words blog)

My brain seems to engage the turbo boost as a deadline approaches. For issue 68 of Magma on the theme of Margins, I submitted 3 poems but couldn't come in from the cold immediately. I carried on writing and an hour later I'd finished another poem that I thought had a chance, withdrew my previous document and re-submitted with the extra poem tacked on the end.

The poem didn't make it into the Magma issue but, with very little further editing, it made the shortlist of the Bridport last year. Out of choice I'm not a speedy writer but it is comforting to know that I can get a decent framework for a poem into existence within an hour. Most of the online courses I have participated in have worked with weekly prompts, and it's rare to attend a poetry workshop without a few 10 minute writing exercises. I used to struggle with these and always feel sorry for fellow participants on a course when nothing springs to mind during one of those exercises. I knew that not being able to produce something tolerable in ten minutes didn't make me a bad poet, but I didn't want to imagine others might be thinking that to themselves if I responded with, “erm, I didn't really get anywhere with this one.”

I pushed myself to the limit on this last year, participating in a Poetry Marathon where every hour for 12 or 24 hours half and full marathon poets received a prompt and had to respond to it within the hour.

The Goal: Write one poem every hour, for twenty-four hours, straight.
The Reward: In one day you will write a chapbook worth of poems. An admirable achievement. You also get the satisfaction and bragging rights that comes with completing a challenge, as well as the Official Marathon Writer’s Certificate.
(The Poetry Marathon) 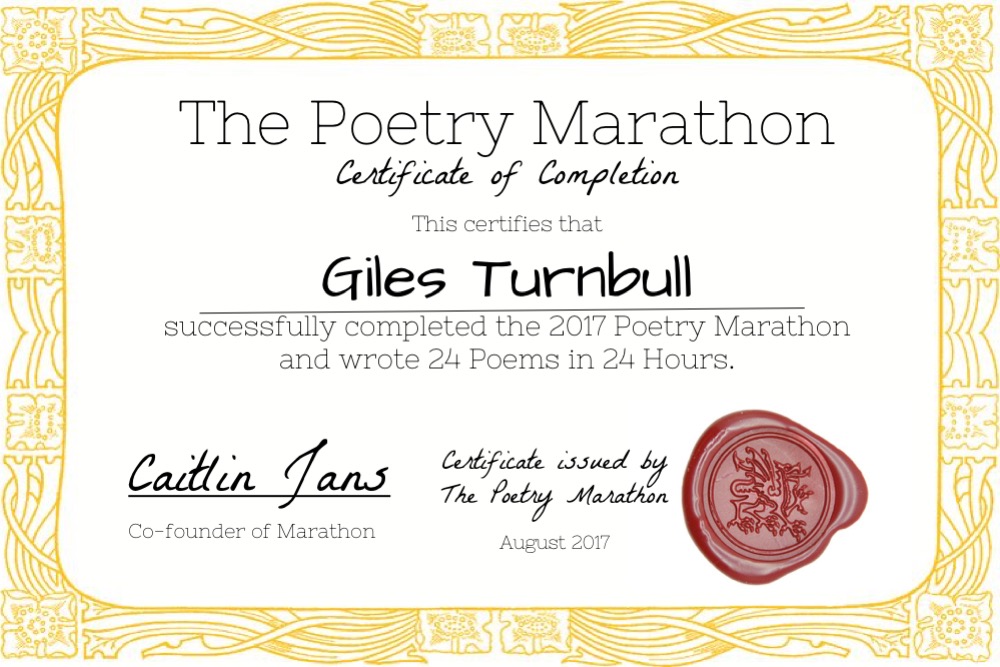 The thing that would most improve my life is 27 hours in a day. I could meet all my deadlines.
(Yoko Ono, Japanese multimedia artist, singer, songwriter, and peace activist)

My last act of 2017 was to submit to the Magic Oxygen competition which, although it doesn't have any theme, it is an organisation that has the environment at its very heart. I mentioned the competition in my post on 31 December 2017, This is the Way the Year Ends. I remembered about the competition on the very last day of the deadline so didn't have time to write and edit anything new!

I did, however, remember a poem I drafted in my early days of poetry. A poem that considers how much we value the environment these days. It didn't actually need any editing, just basic formatting and off it went. It'll be great if it gets anywhere in the competition, but it's even better that an old poem was been able to stretch its legs and explore the world. Deadlines don't just sharpen my editing eye, they focus my archival brain too .. I wish you many happy deadlines in 2018 :)

Please don't think that I am one of those squishy types who can't handle reality. I have plenty of real-world things to deal with all the time. I have deadlines, meetings, I answer the phone, I get turned down, I wait in lines and am forced to pass for normal all the time.
(Henry Rollins, American musician, actor, writer, television and radio host, and comedian.)

All quotes about deadlines in this post come from Brainyquote.com)