This is the Way the Year Ends

This is the Way the Year Ends

I had the best possible start to 2017 with my pamphlet, Dressing Up being born mid-January, and the final stanza of my Christmas haiku sequence being published on the World Haiku Review website around the same time.

Other publication highlights included The Missing Man, a poem looking at what it might be like to be a poet with dementia was published by Ink Pantry; Wandering Eyes and Cold Hands were published by Nine Arches Press in the anthology Stairs and Whispers: D/deaf and Disabled Poets Write Back, and Hauntings in the Kitchen, a poem about a ghost haunting a biscuit barrel, was published in the White Noise and Ouija Boards anthology by Three Drops from a Cauldron. Bringing the year to a close my poem Religion of the Species, a poem that considers whether animals believe in a God, was published by the lovely Algebra of Owls in mid-December.

Close But no Cigar

Persistence often pays off. Two such observations of that came during 2017. In April I sent in two poems to Algebra of Owls and, despite neither being published, one of them did make the shortlist of 28 poems from the 216 that had been received that month. When I submitted to the Bridport Prize in 2016 my entry didn't receive anything. But my later Algebra of Owls submission, listed above, did make the grade, and my 2017 Bridport entry did make the shortlist, as related in my 29 October blog post.

Probably the most significant impact 2017 had on me was in terms of my confidence, personal and poetic. When my pamphlet was published I had to figure out how best to perform at poetry readings. As I've talked about in many posts on here, being blind and lacking a good memory presents considerable challenges when it comes to reading my poetry to a public audience. Beginning with my first launch event at Waterloo Tea in the Wyndham Arcade in Cardiff, I've progressed upwards from a 20 minute set to a full half hour set. My computer screen reader partner, Hazel, has been invaluable, bearing half the program on her slender shoulders. You can hear the opening poems from my set at Putney Library back in October here, with me reading Alarm and Hazel reading Breakfast is the Most Important Meal of the Day. My last reading of the year came in Pontypridd in November, where I surprised myself by managing a set of almost 15 minutes all from memory; two years ago it was a struggle to remember 5 minutes of poetry :).

The personal confidence boost in 2017 came when I decided to get my blind mobility skills back up to speed. I haven't quite managed the whole journey to a poetry event by myself, but I'm getting close. When I went to Putney my dad dropped me at the station and I got the train to Paddington where I was met by an old friend. I've been working with my mobility instructor to build my confidence in getting onto trains and off again (imagine closing your eyes as you get up from your seat on the train and not opening them again until you've found the platform ... please don't try this in practice because it can be easy to miss the platform and slip down between train and platform!) Also in November I took a trip to a poetry workshop in Presteigne by myself, and I aim to do more such events during 2018 — the first date in my diary will be going to see John Cooper Clarke perform in Newport (it's about 13 years since I last saw him supporting The Fall in Milton Keynes) and then in April I'm due to read at the Abergavenny Writing Festival, 19-21 April 2018.

Not Waving but Studying

2018 is definitely going to bring the biggest challenge of my blind life. Returning to Swansea University (which has a beach 10 paces from the main drive) to study for an MA in Creative Writing is going to test my aptitude for studying, mobility around the campus, management of money and medications, cookery and laundry, shopping, socialising and probably a hundred things I haven't even considered yet! I fell in love with poetry whilst I was there to study chemistry in the early nineties, writing my own early work and attending as many poetry readings as I could. This was around 20 years before my first poem was published, so it'll be wonderful to be back in Swansea as a more active member of the city's poetry life. 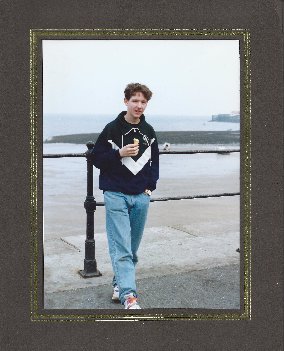 The Dying Embers of the Year

Not a lot happens between Christmas Day and New year, other than eating Christmas cake, chocolates and mince pies, but I did actually submit two poems to a competition yesterday!

There's not much time left to enter this (about 12 hours to be precise if you're reading this post at the instant I post it!). It's the Magic Oxygen Poetry Competition. I got my entry in last year in November, but it totally slipped my mind until this week this year! The deadline is midnight on 31 December 2017. They are accepting short stories up to 4,000 words (not including the title) and poetry up to 50 lines (not including title or lines between stanzas). There is no particular theme. Simultaneous submissions are NOT allowed. You'll need to type / paste your entry into a text box on the submission page, so the advice is not to worry about formatting like underlining, bold or italics.

I love the Magic Oxygen competition because (a) it has a £1,000 first prize, second prize £300, and third prize £100, plus two Highly Commended awards of £50, and the prizes are the same in both short story and poetry categories, and, more importantly, (b)

If you’re not familiar with the MOLP contests, we also plant a tree for every single entry too making our contests the only ones where everyone wins!
(from Magic Oxygen website)

In addition to planting a tree per entry, they also email you the GPS coordinates should you be inclined to visit your tree in Kenya at some point in the future, AND they use money from entries and anthology sales to help build new classrooms for children in a village near the Word Forest :)

Wassail is a hot, mulled punch often associated with Yuletide, drunk from a 'wassailing bowl'. The earliest versions were warmed mead into which roasted crab apples were dropped and burst to create a drink called 'lambswool' drunk on Lammas day, still known in Shakespeare's time.
(Wikipedia)

So, from your sober poet friend, here's to a happy and poetically productive New Year! :) xx