The Poet in the Library

The Poet in the Library

I love libraries; what writer doesn't (that's rhetorical!) I didn't read a lot of poetry from Harrogate Library when I was a teenager, but they had several of Charles Bukowski's poetry collections and I loved them. I remember them having brighter cover designs than anything else on any other shelf!

When I co-founded Splinter Magazine with Felicity Collier (now a journalist for the Morning Star newspaper), writing about indie music, we had to send copies of each issue to the British Library. I was delighted to hear that Lunar Poetry Podcasts, on which I participated recently in a discussion about Access to Publishing for disabled and minority writers, is going to have all of its podcast episodes archived by the British Library.

LPP has been shortlisted for a Saboteur Award (Best Wildcard) as well as a British Podcast Award (Represent category).
We have recently agreed a deal with The British Library which will result in the entire series being archived in their audio archive.
(Lunar Poetry Podcast website)

I spent most of my pocket money as a teenager on library book fines — I never finished reading the books by the date they were due back, and I was never well-enough organised to take them in and renew them in time. Libraries are great places for readers, sighted and blind alike. Most high street libraries will have CD audiobooks in addition to the shelves of hardback and paperback books. It is a crying shame that so many libraries are under threat of closure when town and city councils have to prioritise their stretched financial budgets. I would urge you to sign any petition for your local library if it comes under threat

Hundreds of libraries have closed across the UK

Almost 8,000 jobs in UK libraries have disappeared in six years, about a quarter of the overall total, an investigation by the BBC has revealed.
Over the same period, some 15,500 volunteers have been recruited and 343 libraries have closed, leading to fears over the future of the profession.
(BBC News story)

Until I was 3 years old I lived in a rural village called Birstwith, about 3 miles from Harrogate. I don't really remember it, but I do know that my mum used to take me to the mobile library that called into Birstwith, as best we remember, every week.

The BBC has compiled data from 207 authorities responsible for running libraries through the Freedom of Information Act. Our analysis shows:

I Know an Old Woman Who Swallowed a Fly

I love love love poetry libraries! I'm the (voluntary) blindness advisor to the Scottish Poetry Library, and I am a member of the Poetry Library at the South Bank Centre in London.

What is the Poetry Library?

The Poetry Library initially loaned audio CDs of poetry to people registered as blind or visually impaired, but they now operate a CD library loan service to anybody in the UK. The Scottish Poetry Library offer a similar service — I recently borrowed a CD of Douglas Dunn reading from his poetry. The Poetry Library service will dispatch a pair of audio CDs each month, and once you've returned them you receive the next month's CDs. I've received a mixture of recordings featuring classic verse to contemporary poets. Compact discs I've listened to this year include Paul Muldoon and Les Murray, Rupert Brooke, William Carlos Williams, Alice Oswald, and Daljit Nagra. If you are a UK resident I heartily recommend checking out this library service

Spider in the Library

I count my blessings that the Poetry Library does not invoke fines for late returns of CD loans. One of the CDs that I received this month was of American poet May Swenson reading from her work. The CD was due to be returned on the 28th and, on the 29th, I popped it into my CD drive and had a listen ...

During her long career, May Swenson was loved and praised by writers from virtually every major school of poetry.  She was one of America’s most imaginative, insouciant, and vital poets.
May Swenson belongs to that select group comprising our century’s foremost poets.  But even among such rarefied company, Swenson stands out in her joyful and sensuous lyricism.
(May Swenson Society)

Although I had heard the name May Swenson, I had not listened to her reading any of her work, nor read any of it for myself. The CD took my breath away with its simple language telling complex stories, some of which were on quite unexpected subjects. 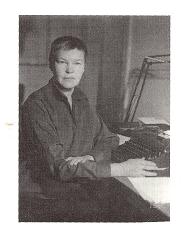 There is a YouTube video of May Swenson talking about her writing process, recorded in 1969 for ‘Poetry is Alive & Well & Living in America’ (though the background music in that video is rather distracting!)

One of May Swenson's poems on the CD is titled The Cross Spider, and my imagination fired up instantly on hearing the title as a spider in a bad mood, stamping its 8 feet all of which were sporting Doc Martin boots. Wikipedia helpfully clarifies that the Cross Spider is Araneus diadematus, Female, size:18mm.

May Swenson's poem The Cross Spider tells of a spider named Arabella who was taken up to Skylab 3, orbiting earth in 1973.

This spider is from an experiment flown aboard Skylab, a space station launched into Earth orbit by the United States in May 1973. Scientists and students interested in the growth, development, behavior, and adaptation of organisms in weightlessness provided a variety of biology experiments for flight in the orbital research laboratory. A common Cross spider, "Arabella" participated in a web formation experiment suggested by a high school student. The experiment was carried out on the Skylab 3 mission, which lasted 59 days from July 28-September 25, 1973. Astronauts Alan Bean, Jack Lousma, and Owen Garriott carried out the scientific research in space, reported the results, and returned this specimen at the end of their mission.
(National Air and Space Museum)

This Poet is Not On Display

‘This object is not on display at the National Air and Space Museum. It is either on loan or in storage.’ Poor old Arabella, I hope she is in comfy storage ... is this what happens to poets wen they have transcended this mortal coil ... they are stored in the Poetry Archive?

Why not take a moment and watch the lady herself, doing what she does best, spinning a web in zero gravity :)