Blind Poets of the World, Part I

Blind Poets of the World, Part I

Last weekend I heard about a program in BBC Radio 3's The Essay series, one of 5 episodes by Tom Shakespeare looking at 'The Genius of Disability' — Al-Ma'arri - Visionary Free Thinker.

Abul 'Ala Al-Ma'arri became visually impaired in childhood and went on to become the most famous poet in the Arab world, but is still barely known in Britain.

It is a fascinating episode and a podcast can be downloaded here (mp3 format).

Although welcomed in the literary salons of Baghdad, al-Ma'arri became an ascetic, who avoided other people, and refused to sell his poetry.

I find it immensely interesting how many routes there are into blindness. My own came from a relatively mundane complication from diabetes in my early 30s, having been diabetic since my teens. Al-Ma'arri became blind after contracting smallpox at age 4. In 13 minutes the podcast packs in an introduction to the poet, his background and his poetry, and numerous episodes from his 10th century life, as well as a recent beheading of a statue to Al-Ma'arri. I myself have not been beheaded yet (as far as I am aware) but it has been a week of writing about blindness and poetry. I am delighted to have had two articles accepted for publication, looking at how blindness has affected my experience of writing poetry and attending and participating in the poetry world.

One article is coming in the first issue of a new Irish magazine called Corncrake, and in it I cast a broad look at several of the impacts of blindness, and includes a poem inspired by a painting from Disability Arts Cymru called Study in Red by profoundly deaf artist Lucy Chaplin. Corncrake is slated to launch its first issue in June.

The second article, coming in the summer issue of Poetry Wales looks in a more focussed way at the role of the visual in poetry. It continues with another poem written in response to a piece of artwork from Disability Arts Cymru, this time a poem called Tomorrow's Dancers inspired by the painting Blue Ballet Slippers by mouth painter Rosie Moriarty-Simmonds who has 4 fingers and 13 toes as the result of Thalidomide. In both cases I find myself being driven by the idea of a blind poet responding to visual artwork by artists who themselves have disabilities that are part of how they express their art. 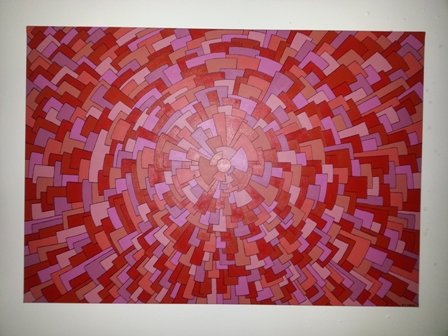 Photo captions: Paintings Study in Red by Lucy Chaplin, and Blue Ballet Slippers by Rosie Moriarty-Simmonds. with thanks to Disability Arts Cymrufor hosting the images of the paintings on their website, and to Antoinette Rock for the ALT tag caption texts describing the photographs.

I'll close this week's post with two quotes. A lyric from the track Reverence by Faithless, "You don't need eyes to see / you need vision" and from myself, "just because you are sighted / does not mean you are not blind."

Thanks for reading this post, whether you are reading it with your eyes, your ears, your fingers or your toes. Future posts will profile contemporary blind poets who I have encountered in my literary travels, so keep your eyes peeled :)